You may have read my admission that I’m not very happy with my labels for yarnbombs. It seems to focus everything on my ineptitude with the physical world – paper and printer and laminate and lettering seem to elude my control. For my Woollypoles piece #1 I had a clear vision of medal-like metal discs hanging from the surface of my runic piece – but what were they? The only thing I could think of in the real world was the round token I used to pay for school dinners with (and the knitting shop certainly didn’t have any of those).

From John Lewis the round things I could find were clear, thin plastic discs about an inch 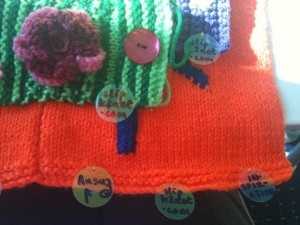 across – rather hyperbolically perhaps labelled ‘sequins’, though when I dropped one on the floor this morning and it caught a sunbeam it did shine bright emerald like a CD. Realised that a DVD pen would write on them, liked the idea, and eventually got round to finding a set in Smiths of various colours of ‘permanent markers – write on most surfaces’. Today finally had chance to do the faffy bit, and actually quite enjoyed designing tags based on previous drafts.

The plastic ‘medals’ went best along the bottom of Woollypole #1, though the spacing gave me head-scratching – they would have been too crowded at the 1/4, 1/2, and 3/4 positions along the bottom of each square, then I tried doing it by eye (badly), then I realised that what they needed was to be equidistant from each other (not counting the seam), so once I had placed the middle ones (lower down, saying ‘slipk2not.com’), it was a simply enough matter of counting stitches and calculating thirds.

It may be hard to tell from these pictures but out of the four colours of pens I had I did try to choose one to coordinate with the piece. Obviously dark blue for #1 (the runes piece). Piece #2 (‘enjoy’, in purple and yellow) looked best with a serious black-inked tag.. For piece #3 (the flowers) luckily the red pen had enough definition (the green didn’t) and blended well.

I also picked colours of cotton to match or blend! For the purple piece a blip of contrasting yellow coordinated nicely, and for the green one I had a dark green that would blend. For the orange piece I wanted to blend too, but couldn’t find orange cotton despite the fact I

know I bought some, and was unwilling to compromise on either peach-coloured cotton OR contrasting dark blue cotton OR waiting till later to finish it 🙂 Rooting through my bits box to check for the orange, I found everything wrapped in ‘invisible nylon thread’ (it was easier to feel it than see it…!) so dragged that out and it was great. An absolute bugger to work with, as not only is it barely visible, it also has hardly any friction and slides straight out of both the fabric and the needle, which I eventually addressed by using a longer bit than I normally would!

I used three discs per panel of the runic piece to give the name of the rune (in script with curly zs), the blog address (printed), and the rune’s meaning (in capitals). It should be enough to give a web search if anyone is interested.

The sequins squizzle around but can be adjusted and are firmly fixed on and pretty sturdy, so I am happy with my artistic / practical solution. I like the way that the clear discs are about the same size as the big red buttons in piece #3, and thus look like part of the design. I did them in my own handwriting too! so although it is homespun I feel independent and satisfied. I wonder where they will go on the Woolly Poles? Kinda hope that the ‘enjoy’ with its feathers will be out of human reach, even though I glued them on firmly, and the runes piece is bold enough to go high up or anywhere, though I’d be happy enough for the flowers piece to be low down for little hands to stroke its buttons and textures. But this must bow before the greater wisdom of the Woollypoles team, who will have the feat of coordinating all the pieces of each colour! Can’t wait to see it….

Should know better
View all posts by slipk2not →
This entry was posted in world domination. Bookmark the permalink.